At a very young age, he developed an interest in Art and decided to join the Ubud Art School.

In 1996, his first exhibitions were held and in 2001, he was invited by the Puri Lukisan Museum to present some of his works.

Over the past ten years, his reputation has widened and he has been approached by some of the most important Indonesian and European galleries. 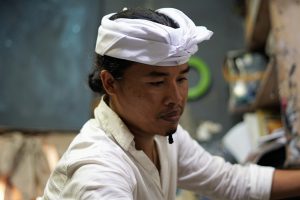 Ada paints with acrylic. He also creates unique material effects by applying his paint directly with the tube. His talent is to illuminate each shape with subtlety, without any flashy effect.

However, Ada likes to point out that his true technique is that of “the Art from the Heart”. So, each of his works exudes both his sincerity and his deep love for the magnificence and splendour of nature that he honours in each of his paintings.

Several of his most outstanding works, including “Full Moon” and “Tree of life” are for sale on www.my-obe.com. For a time full of emotion, we invite you to see Ada in action. Click on the link hereafter: Ada and My O’BE.